Skip to main content
The University of New Mexico

There are thousands upon thousands of viruses in our various environments affecting our everyday life in a variety of ways. Many of those viruses infect humans by entering and exploiting the nasal route. Scientists at The University of New Mexico are conducting research to decipher how the immune system and the olfactory neurons present in the nose work together to quickly stop viral entry into other critical organs of the body.

For example, respiratory viruses such as influenza, rhinovirus, and neurotropic viruses, like rhabdoviruses, are known to first infect the nose and then gain entry and spreading into the brain or other organs. Another great example is the flu virus, which also first infects the nasal cavity and then spreads to the lungs. The understanding of how neurons and immune cells work together to stop infection into the lungs or the brain is a critical aspect of infection control.

Back in 2014, UNM scientists, led by Associate Professor of Biology Irene Salinas, studied rainbow trout and discovered that fish have a nasal immune system with viruses that elicit strong immune responses in the olfactory organ. Taking a closer look at the data from that study, they noticed that the expression of some olfactory receptor genes and neuronal genes were also altered in the olfactory organ as a result of a viral infection. 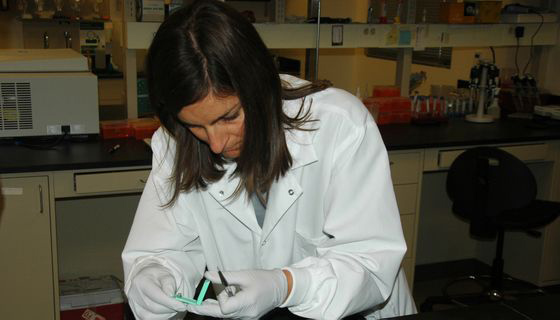 “This observation made us think that maybe neurons were also responding to the virus,” explained Salinas. “The next experiments involved examining different types of olfactory neurons in trout exposed to virus. Soon, we noticed that one type of olfactory sensory neuron, the crypt neurons, disappeared very quickly after the virus was delivered to the nose. Deeper investigation of this phenomenon revealed that crypt neurons were rapidly dying as soon as a receptor they express, TrkA, interacted with the virus.”

The Salinas Lab in the UNM biology department is currently investigating if the antiviral responses they found in fish also occur in mice in order to better translate the findings to possible human infections. They are also continuing to work on trout and zebrafish since fish models offer several advantages over the mouse models to study this rapid neuroimmune interaction.

This study titled, Olfactory sensory neurons mediate ultrarapid antiviral immune responses in a TrkA-dependent manner, was published recently in the Proceedings of the National Academy of Sciences (PNAS) by Sepahi, et al,. and was part of the doctorate thesis of Ali Sepahi. The research is funded by both the National Science Foundation (NSF) and the United States Department of Agriculture (USDA).

“The most remarkable point of the immune response was that it occurred extremely fast, within minutes, a time scale that immunologists usually overlook. The immune response was fascinating, because it could not only be recorded in the olfactory organ, where the virus has just been delivered, but also in the CNS, where the virus was not present at all.” — Associate Professor Irene Salinas

Sepahi joined Salinas lab in 2013 as a Ph.D. student and his thesis focused on different aspects of fish nasal immunity and neuroimmune communication under Salinas’ supervision. Sepahi received his Ph.D. in 2018 and now works as a postdoctoral researcher at the Medical School at the University of Michigan. His current research mainly focuses on immuno-oncology and mucosal immunology on the mouse model.

Three other members of the Salinas lab, including graduate Aurora Kraus, postdoctoral researcher Elisa Casadei and undergraduate student Cecelia Kelly, are also co-authors in the study. The study represents five years of work that involved developing many new assays in the laboratory since trout had not been used for the study of neuro-immune interactions before. 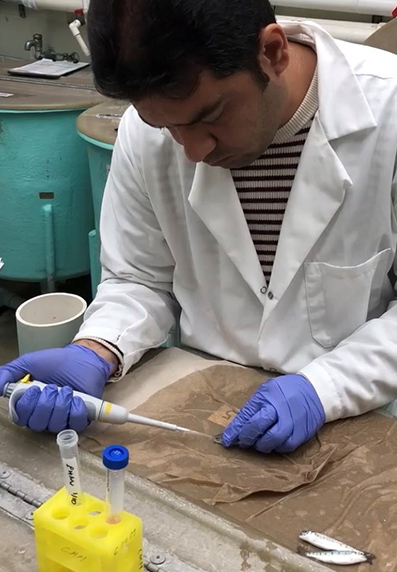 Ali Sepahi conducts tests on fish in the lab.

The Salinas lab also teamed up with fish electrophysiologist Mar Huertas at Texas State University. The research revealed that fish can smell viruses triggered by electrical responses in olfactory neurons. The signals were then sent to the olfactory bulb in the central nervous system. Next, the researchers asked if the neuronal activation observed was paralleled with immune responses against the virus and they found the answer was yes.

“The most remarkable point of the immune response was that it occurred extremely fast, within minutes, a time scale that immunologists usually overlook,” Salinas said. “The immune response was fascinating, because it could not only be recorded in the olfactory organ, where the virus has just been delivered, but also in the CNS, where the virus was not present at all.”

These findings revealed that a neuroimmune collaboration between the periphery (olfactory organ) and the CNS (olfactory bulb) exists against viruses. It also showed that immune responses in the CNS can happen even when there is not an active infection there, but in response to distant pathogenic stimuli.

Christopher Alan Johnston an associate professor in the UNM Biology Department and co-author on the paper, produced viral recombinant proteins that allowed the team to identify what part of the virus is actually interacting with the trout olfactory neurons.

A final proof of the importance of olfactory sensory neurons in antiviral defense in fish came from a different animal model system: the zebrafish. In this case, Victoriano Mulero’s team at the University of Murcia, Spain, helped develop a new tool: a zebrafish in which the crypt neurons were ablated using a prodrug in the water. Comparing zebrafish with crypt neurons and those without crypt neurons showed that in the absence of crypt neurons, zebrafish succumb to a rhabdovirus infection more readily.

“I am a fascinated about the commonalities between the nervous system and the immune system,” said Salinas. “We use fish as a model because their olfactory system is pretty similar to that of mice and humans. Fish, however, offer a clear advantage: their olfactory organ is superficially located and therefore we can perform easy dissections and very quick in vivo experiments like the ones in this paper that are very tricky to perform in mice.”

Salinas’ research focuses on mucosal immunity, especially nasal immunity and its evolution in vertebrates. Mucosal surfaces are at the interface between hosts and the environment. The olfactory epithelium is a mucosal surface with a very unique characteristic: neurons are directly exposed to the environment. This means that neurons, which usually are not directly exposed to pathogens, are constantly interacting with microbes in the olfactory organ. Olfactory neurons, also, are one step away from the CNS, the final target tissue of many harmful viruses such as rabies or influenza.

“The findings really highlight how important nasal immunity is to keep the CNS pathogen-free. How brains respond, and therefore how we behave, appear to be influenced by the signals that our nose sends to the brain in response to danger (like viruses),” said Salinas, who is also part of UNM’s Center for Theoretical and Evolutionary Immunology (CETI). “This fascinating concept needs to be further studied.”

Additionally, these findings may have important implications for the design of nasal vaccines both for use in fish farming and for humans, according to the team. The translation of these findings to human health requires careful examination in mammalian models, project that is currently ongoing in the Salinas laboratory.